In the presence of harmful pathogens or internal stressors, the three protein components assemble into an inflammasome, of which six are depicted below.

How do inflammasomes activate the innate immune response1-3?

Upon threat sensing, the relevant receptor undergoes oligomerization and conformational change into a pinwheel-like shape in order to make their pyrin domains available for binding to adaptor ASC. The activated inflammasome serves as a docking platform for additional ASC molecules, which polymerize  to form a large filamentous signaling platform known as an ASC Speck.  ASC Specks provide a scaffold for pro-caspase-1, which is cleaved into active caspase-1, which in turn, triggers activation of the pro-forms of cytokines IL-1β and pro-IL-18 into their active forms, initiating the inflammatory process. Active caspase-1 also cleaves Gasdermin D into its active form, which triggers cell death, known as pyroptosis, releasing active cytokines and ASC Specks into the extracellular space. Exracellular cytokines and ASC Specks continue to produce active cytokines, heightening and perpetuating the inflammatory response in neighboring cells and tissues.

What is the role of inflammasomes in the adaptive inflammatory response3?

The adaptive inflammatory response is activated when the innate immune response is inadequate. It responds to a specific immune trigger (antigen) and has memory for that specific antigen for efficient response to future encounters with the antigen.

Through activation of cytokines, inflammasomes amplify T and B cell responses. IL-1β can act on lymphocytes in several ways including upregulating IL-2 receptor expression, prolonging survival of T cells, enhancing antibody production by B cells, and increasing B cell proliferation. IL-1β and IL-18 play a critical role in driving the differentiation and amplification of Th17 and Th1 cells, respectively.

What is the role of inflammasomes in disease3-6?

Although the immune system is critical for health, excessive and/or chronic activation of the immune system can occur, including development of inflammation against the body’s own cells, resulting in immune-related inflammatory disorders. There are over 80 inflammatory disorders, including type 1 diabetes, rheumatoid arthritis, multiple sclerosis, and Crohn’s disease, which affect 5-7% of the population in Western Societies.

Multiple inflammasomes are linked to each of numerous inflammatory disorders, as seen in the table below: 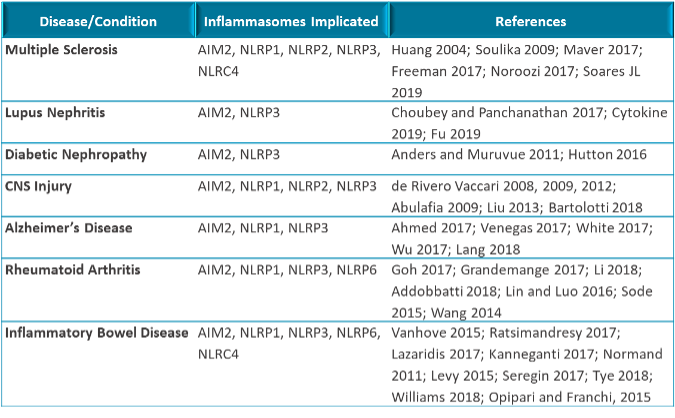